In this second of a two-part DVD set, Dan Dalrymple, the Head Strength and Conditioning Coach of the Super Bowl Champion New Orleans Saints, concludes his philosophy of training to get the most out of your athletes. Based on his more than 20 years in the business and entitled, 'What I Have Learned So Far,' Coach Dalrymple details the essentials of a productive strength and conditioning program that will work at any level. It is guaranteed to improve the overall performance of your athletes. Make your strength and conditioning program the best it can be by learning from a Super Bowl Champion now available at AFM Media.

Coach Dalrymple was selected as American Football Monthly's Professional Strength and Conditioning Coach of the Year in 2009. Both Dalrymple and Saints Head Coach Sean Payton coached together at Miami (OH) in the mid 1990's and formed a unique bond. When Payton joined the Saints in 2006, he hired Dalrymple as his first and only Head Strength and Conditioning Coach. Four years later, the result was a Super Bowl trophy. 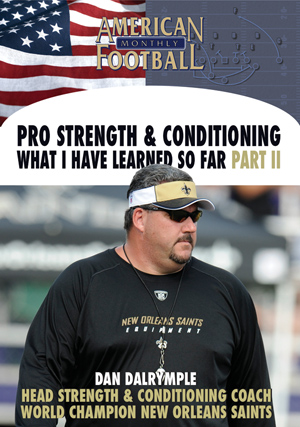