Two seasons ago, Coach Jim Girard installed the 30 Stack defense at Wayland High School (MA). He did so because the team did not have much size but this specific defense could take advantage of his team speed. In that time, Wayland went from one of the worst defensive teams in their league to one of the best in the state. The 2006 and 2007 seasons resulted in a turnover ratio of +38, seven shutouts, and seven defensive touchdowns. In this video, Coach Girard discusses the keys to defending the inside run with the 30 Stack defense.

In this video, you will learn from Coach Girard:
* The base alignment of the 30 Stack and player responsibilities.
* The keys to defending the inside run with the 30 Stack defense.
* Wayland's defensive acronym AIR: aggression, intelligence, and reliability.
* The importance of having six defensive players aligned from tackle to tackle and outnumbering the offense inside.
* BONUS CHAPTER (what ifs?): Coach Girard answers the most frequently asked questions about defending the inside run against multiple offenses.

Coach Girard:
"The key for us is having, with the 30 Stack, six men from tackle to tackle. We outnumber the offense inside and, with this defense, maximize our effectiveness against the inside run." 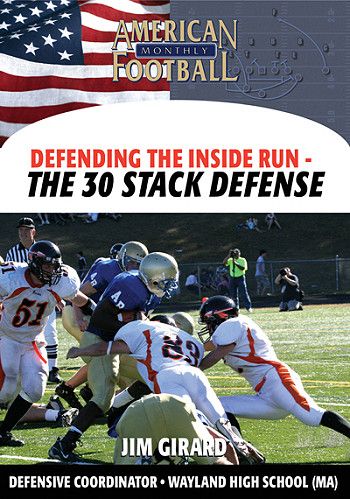