Coach Lew Johnston has run the Wing-T offense since 1989. During that time he was named the Virginia Southeastern District Coach of the Year six times, his teams won five district championships and one regional title, and, at one point, his teams won 32 straight games between 2001 and 2004. Now the head coach of Nansemond-Suffolk Academy in Virginia, Coach Johnston has completed a six-set series of DVDs on adapting the up-tempo spread offense to today’s Wing-T. This DVD is on attacking specific defenses. The entire set is now available at AFMvideos.com.

·     The objectives of the up-tempo, spread wing-t offense.

·     How to force the defense to adjust to your offense.

·     How to show lots of motion and shifting in this offense.

·     10 specific principles of this offense including simple communication for play calling.

·     How to start your attack by testing the flank with the Jet Sweep from both the Wildcat and Tiger formations.

·     How to determine where the defense is weak.

·     How to attack the defense across a broad front.

·     Using the Wildcat formation to stretch the defense both vertically and horizontally.

·     To mix in a passing game to complement a running game.

·     To use play-action passes when they are least expected.

·     How to change up the pace to keep the defense off balance.

·     How to use the unexpected call at the right time. 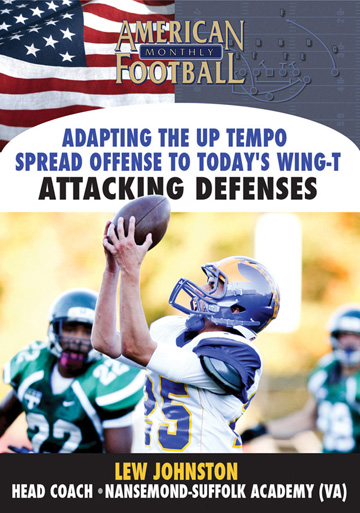