In the last three years, Wayland High School (MA) has a Massachusetts state title, two league championships and an overall 32-4 record. Running the Shotgun Spread offense, Wayland has had two players rush for over 1,000 yards in each of the last two seasons. In this video, the second of a three-part series, Head Coach Scott Parseghian details the option attack out of the Shotgun Spread. He explains the one-back option attack, the two-back option attack, option reverse, and speed sweep.

Coach Parseghian:
"The Option attack within our Shotgun Spread is a major part of our offense. This includes both the one and two-back attack. The combination of the option attack and misdirection can freeze the defense and lead to big plays."

This video includes extensive use of game film. 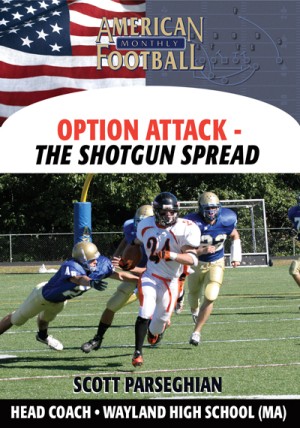