Steve Specht has compiled an 103-33 record with two state championships. Known as a defensive specialist, Coach Specht employs his 3-3-5 as an odd stack front and coverage. He has just completed a four-set series of DVDs now available at AFMvideos.com. This fourth video details how Coach Specht defends the spread offense.

·     Priorities based on the type of quarterback that you are facing.

·     What concepts to use if the passing game is focused on backside isolation or the front side concept.

·     How to defend a running quarterback.

·     How the offensive blocking scheme determines responsibility – both the linebacker and defensive end react accordingly to the offensive scheme.

·     Base – read schemes including a ‘backside scoop’ and ‘backside base.’

·     An additional safety in the box provides a bonus defender and the defensive call predetermines responsibility.

·     How to identify and then eliminate the ‘key’ receiver.

·     Specific types of coverage in identifying the ‘key’ receiver – ‘mouse’ and ‘snake’ coverage. 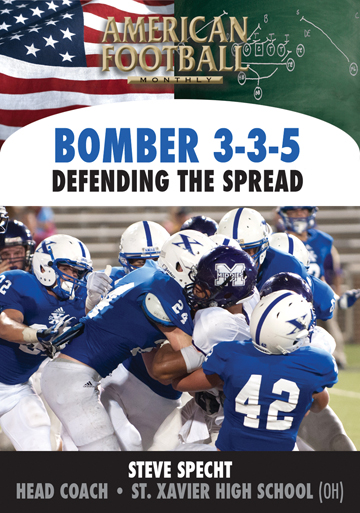