St. Xavier High School (Cincinnati) Head Coach Steve Specht uses an odd stack – a 3-3-5 – as his base defense. His philosophy in the box is to employ read scheme techniques and behind that go five across in the secondary to disguise coverages. A two-time state champion, Coach Specht recently completed a four-set series of DVDs. Video #2 is entitled, ‘Coverages’ and includes underneath techniques, corner, bump, hole/curl, and robber techniques.

·     Positioning of the base defensive alignment.

·     “Loose Man” technique coupled with an underneath matching zone philosophy.

·     “Bump” technique and rules and responsibilities.

·     Zone concepts – the addition of the Robber technique with rules and responsibilities.

·     Addition of the Funnel Flat technique.

This DVD includes game film to illustrate the various coverages. 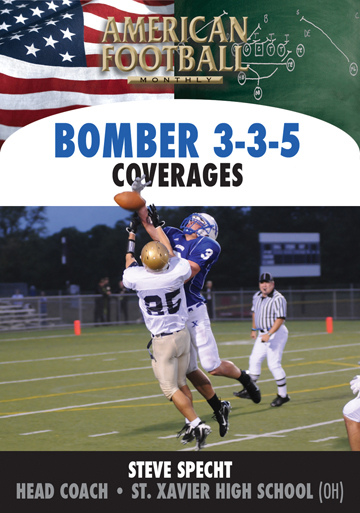