Atlanta Falcons Defensive Line Coach Ray Hamilton has been an NFL coach for 22 years. 'Sugar Bear' also played in the defensive line, primarily as a nose guard, for the New England Patriots for nine years. Coach Hamilton refers to his D-Line players as 'Disruptive.' In this DVD, the second of a two part coaching set, Coach Hamilton illustrates basic D-Line techniques and drills through on-field demonstrations.

In this DVD, you will learn from Coach Hamilton:

* The keys to being a successful D-Lineman against the run.
* The importance of stance, power step, and response step in being an effective run stopper.
* The proper stance, get off and footwork necessary to be a consistently successful D-Lineman.
* Drills to improve the techniques of your defensive linemen including the Lateral Bags and Attack drills.

"We want our D-Linemen to always be aggressive putting constant pressure on the offense. This DVD includes techniques and drills to do just that and control your O-Line counterpart. Proper footwork and leverage are critical to the success of a defensive lineman." 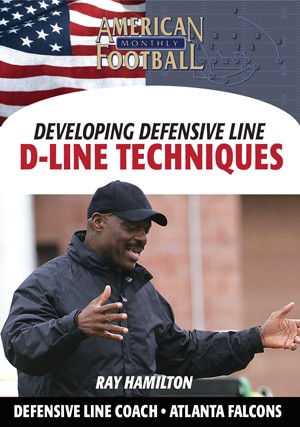