In this video, Utah State Assistant Coach Jeff Copp discusses the philosophy and strategy of the kickoff. Coach Copp illustrates multiple looks with the same assignments, kickoff field zones, leverage techniques, and coverage responsibilities. A simple definition of the Pod philosophy is also included with returns that you will see and how adjustments can be made.

In this video, you will learn from Coach Copp:

* Utah State's simple philosophy and strategy of kickoff coverage.
* Multiple looks with the same assignment.
* Kickoff field zones including the Speed Zone, the Avoid Zone and Contact Zone.
* Sideline, Box and Rabbit drills to improve overall kickoff coverage.
* Ways to gain leverage on kickoff coverage.
* Coverage responsibilities for all players on the kickoff team.
* Actual film review of specific returns and how to react.
* BONUS-what if? What type of player do you place on your kickoff team? What do you look for in your inside players as well as outside players? How do you adjust to double teams?

Coach Copp:
"Kickoff is the purest play in football. It's running, hitting, and tackling. Kickoff coverage has different alignments and different rules and gives your players an opportunity to run down the field unblocked and make a play. You want ten kids with big hearts to play on the kickoff team. They don't necessarily have to be the biggest or fastest on the team. But they have to understand what their job is and they know they have to do it at full speed." 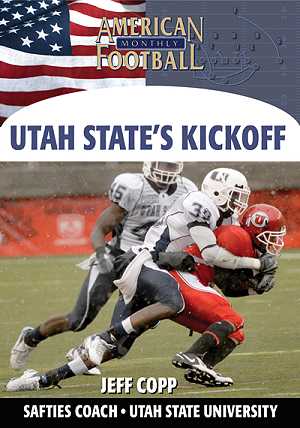