With the explosion of the up-tempo, spread offense across the country, Coach Lew Johnston has adapted all of its nuances to today’s version of the Wing-T. Head Coach of Nansemond-Suffolk Academy in Virginia, Coach Johnston recently completed a four-set series of DVDs on the installation of this package, the running game, the passing game, and attacking defenses. Coach Johnston has coached the Wing-T since 1989 with an overall winning percentage of 82%. He takes you step-by-step in this first video, the installation of this offense.The complete DVD package is now available at AFMvideos.com.

In this DVD you will learn:

·     How Coach Johnston became aware of Coach Gus Malzahn’s background with the Wing-T before developing the up-tempo, no-huddle offense that has been so successful at Auburn.

·     How Coach Johnston experimented with this adapted offense in goal line situations and scored a touchdown 97% of the time it was used.

·     The three objectives when running this offense.

·     The general principles involved in the execution of this offense.

·     The various personnel packages and formations evolving from this offense.

·     The types of athletes needed at every position.

·     Position alignment for both the ‘Wildcat’ and ‘Tiger’ formations.

·     The critical importance of communication in play calling.

·     A step-by-step procedure in the installation of this offense. 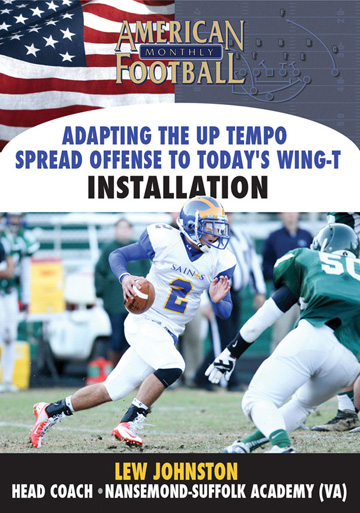