Steve Specht has been the head coach of St. Xavier High School in Cincinnati for a decade and is a two-time state champion. Considered one of the leading defensive high school coaches in America, Coach Specht uses a 3-3-5 to defend the zone read. The recipient of the prestigious 2012 Don Shula NFL High School Coach of the Year, Coach Specht recently completed a four-set series of DVDs that are now available at AFMvideos.com. The first video is entitled, ‘Zone Read Principles.’

·     Read schemes with responsibilities for the edge players, middle stack players, and the adjuster (middle safety).

·     The “Hinge” technique for the safety/nub corner.

·     Read scheme – isolation – for play side, middle stack players, back side, adjuster and additional two safeties.

·     Read scheme – stretch/toss – for play side, middle stack players, back side, adjuster, and additional two safeties.

This DVD includes detailed game footage to complement the presentation. 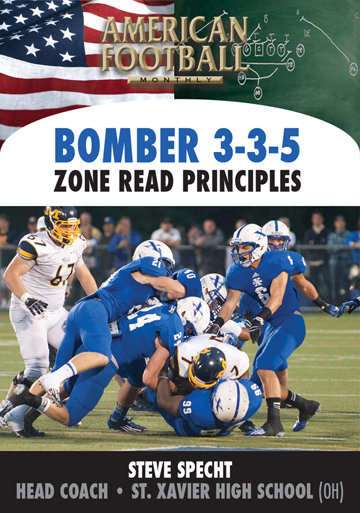