Charlie Stubbs began a long and distinguished coaching career when he joined the BYU staff in the early 1980's. In his second year as an assistant coach, the Cougars won the National Championship. In this instructional video, the second in a series of five, Coach Stubbs shows you how to finish drives in the Red Zone by scoring touchdowns. The thought process in knowing both your offense and what the defense gives you are a major part of this DVD.

In this video, you will learn from Coach Stubbs:
* Successful Red Zone strategies to finish and score touchdowns and not settle for a field goal.
* Things to stay away from when you're in the Red Zone.
* Ways to avoid three negatives in the Red Zone: turnovers, avoiding sacks and tackles for losses, and penalties.
* The importance of the incomplete pass.
* What triggers the Red Zone defense related to yard line and down and distance.
* Strategies of the defense in Red Zone territory; disrupting the offense by blitzing, containing the offense and adjusting to coverage.
* The concept of defenses using zone coverage and why they use it in the Red Zone.
* Ways of self-scouting and knowing your offense.
* Determining factors in your offense: personnel groupings, down and distance, hash, yard line and formations.
* Actual core run and pass plays that have a proven track record of success.
* Passing game philosophy in the Red Zone.

Coach Stubbs:
"This video will demonstrate how to finish drives in the Red Zone and score. Actual running and pass plays are included to attack a defense that's trying to stop you. It's important in this area of the field to find ways to avoid having to settle for a field goal. We call the kicker the 'eraser' because when he's out there it's because somewhere we didn't get the job done. This DVD will help you avoid those pitfalls." 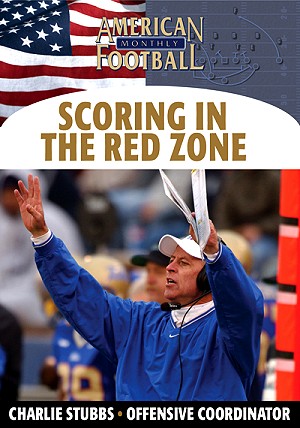