Coach Jo Nixon, the Defensive Coordinator of Langston University, explains various forms of linebacker pressures in this DVD. Langston gave up a total of only 14 touchdowns in the 2007 season. Coach Nixon discusses blitzing four players at the same time, deciphering pre-snap reads, and creating false movement and deception with the offense.

In this DVD, you will learn from Coach Nixon:
* The concept of applying different types of linebacker pressures.
* Importance of the flow of the blitz rather than the blitz itself.
* How four different players can blitz at one time from various depths.
* How to decipher pre-snap reads.
* How to disguise your linebacker coverage so the offense doesn't know who's blitzing and who isn't.
* How to create various movements to confuse the offense.
* What if? What adjustments are made if your opponent comes out in doubles and motions to trips? What if the defense flips strength on your offense?

Coach Nixon:
"This DVD includes different ways to create attacking defenses through linebacker pressures. You can still be solid in your overall defensive coverage with different forms of pressure." 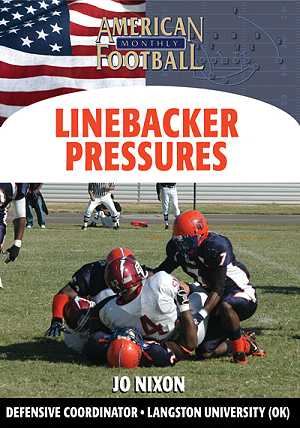