Coach Rick Casko recently completed his 17th season as a head football coach. In that time he has coached some outstanding athletes--such as NFL Running Back Fred Taylor--but has mostly coached average high school players. In this video, Coach Casko discusses how you can be successful with average players. One of the keys is the importance of the trap play. In establishing this play in the middle of the field, it opens up everything else for your offense. The number one priority, according to Coach Casko, is to be able to read the play and the proper blocking assignments. Coach Casko's goal with the trap: gain 1,000 yards with this play alone.

In this video, you will learn from Coach Casko:
* How undersized players can compete against bigger players.
* The importance of successfully running the trap play.
* Angle blocks for the trap from the Pro Set I formation.
* The key to successfully blocking the nose guard--a top priority.
* Gap protection and blocking specific areas.
* Advantages and disadvantages of running the trap vs. odd and even fronts.
* Multiple formations for running the trap.
* Fullback alignment and split-back looks. 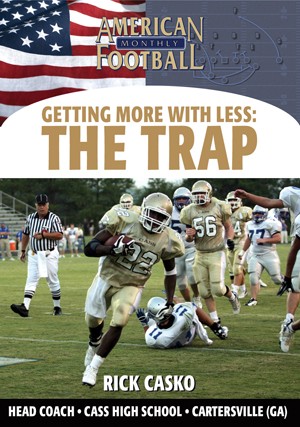