WN-07163 - Getting More With Less: Lead Gee and Counter Plays In his 17 years as a high school head coach, Rick Casko has had a 1,000 yard rusher in 12 of those seasons. The consistent success of two plays--the Lead Gee and Counter--have been the bread and butter in Coach Casko's offense. Now the head coach at Cass High School in Cartersville, GA, Coach Casko analyzes both plays in this video. And both can be effective with average high school players. The keys for the Gee Play include successful double teams and angle blocking. The counter is Coach Casko's favorite play and gives the tailback time to read the defense and run for positive yardage.

In this video, you will learn from Coach Casko:
* The concept of double teams and combo blocks for the Gee play.
* The importance of angle blocking in making this play successful.
* Adjustments for the Gee play against both odd and even fronts.
* The blocking concept of running to an area.
* Blocking alignments to successfully run the counter play.
* Blocking for the counter against both odd and even fronts.
* One-back and two-back sets when running the counter.

This video contains extensive use of game film.
2008-65 minutes 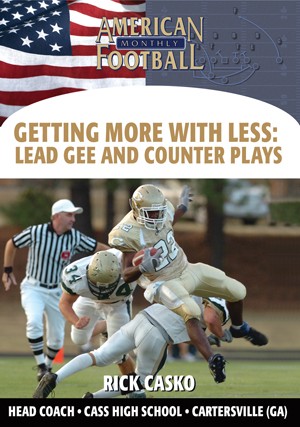