The importance of a potent running game can not be overemphasized. In this DVD, Head Coach Tony Buthe of New Prague High School (MN) discusses his running game but also the importance of having an effective play-action passing game off of your base power plays. Coach Buthe details the combination of running and play-action plays and includes blocking assignments against both even and odd fronts.

In this DVD, you will learn from Coach Buthe:

* The importance of having a powerful running game.
* How to implement play action passing off of your running game.
* Four run/pass combos you can add to your offense: Run Dive and Quick Pass; Run Down and Down Pass; Run Power and Power Pass; and Run Lead and Lead Pass.
* When and where to use play-action passing. * Effective use of motion to help your offense with that extra defensive player.

Coach Buthe:
"This DVD concentrates on developing your power game with an efficient play- action passing game strictly for the Wing-T offense. You can implement directly into your offense the four running and four passing plays that are a part of this DVD."

About the author: Tony Buthe coached New Prague High School (MN) for 14 years, winning 3 Section Championships. Using the Wing-T offense, Coach Buthe’s 2006 team broke the school rushing record with a total of 2,193 yards. He is now a Special Education Director for the New Prague District. His five set series of DVDs on the Wing-T includes how to install a complete offense with terminology, rules, drills, and position-specific techniques. The complete set is perfect for the installation of the Wing-T at every level. 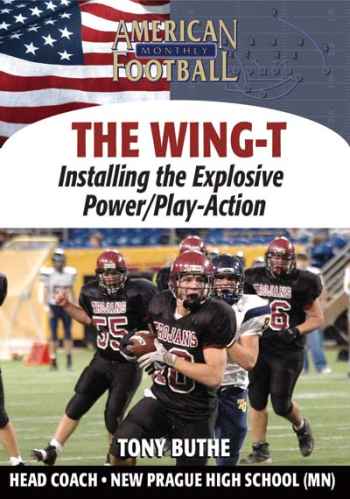