WN-08071 - Keys To First Down Production and Third Down Conversions The name Charlie Stubbs has become synonymous with high-powered, attacking offenses. He has been the architect of record-setting offenses at Oregon State, Memphis, Tennessee-Martin, UNLV, Alabama, Tulsa, and Louisville. In this instructional video, the first of five, Coach Stubbs takes you to the grassroots of any great offense by showing you the correlation between first down production and third down conversions.

In this video you will learn from Coach Stubbs:
* Goals of every offense including winning the fourth quarter battle, having a 40% third down conversion rate, gaining 175 yards rushing and a 4.0 per rush average, and 300 yards passing per game...as well as many more.
* Scripting practice with a purpose.
* Putting together a detailed game plan form for all down and distance situations.
* The strategy of first down production: gaining four yards or more.
* Emphasis on the style of plays to complete your goal; core runs, play action passes, three step/quick passes, screens, and special plays.
* Third down conversion strategy: finishing drives.
* Down and distance plays for converting third downs: 1-2 yards, 3-5 yards, 6-9 yards, and + 10 yards.
* Actual first down plays to maximize third down conversions. 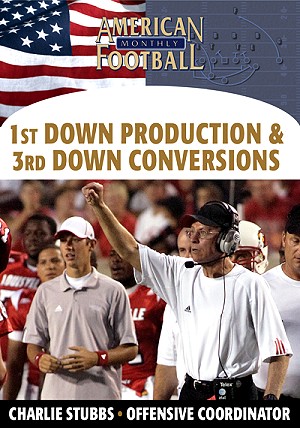