Anthony Panagakos, the Offensive Coordinator at Port Richmond High School (NY), explains the Sling-T Passing Game in this DVD. Coach Panagakos discusses the fact that you don't need a quarterback with a cannon arm to be effective with this offense; rather, accuracy in the short passing game is more critical. Coverages are also detailed in this DVD with the quarterback's rule being 'you glide through a zone and you run away from man coverage.'

In this DVD, you will learn from Coach Panagakos:
* The keys to an effective Sling-T Passing Game.
* Coaching points for your quarterback including proper reads.
* Specific passing plays to beat defensive coverages.
* Base passing plays for the Sling-T: Switch, Smash, Cross and Ohio.
* How to attack Cover 1, Cover 2, and Cover 3 defenses.

Coach Panagakos:
"You don't need a quarterback with a Dan Marino arm to be effective in the Sling-T passing game. Accuracy with your short throws is the key. Our passing game is set up to complete many passes that are between 10 and 15 yards. This DVD also details quarterback reads against various secondary coverages." 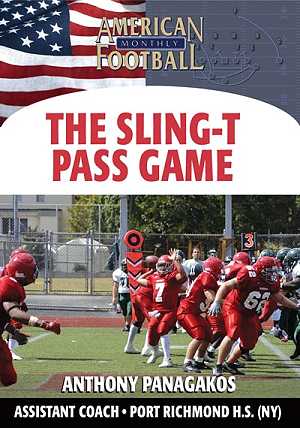