Unleashed in the 2001 Louisiana High School state playoffs by Catholic High School (Baton Rouge), the Spin has become the most talked about new and innovative offensive scheme in the country. Head Coach Dale Weiner was looking for a different way to run their misdirection plays like counter and sweep.

Named because the quarterback pivots on every play, the 'Spin' prides itself on misdirection schemes and similar pattern meshes between the quarterback and the three running backs. After being introduced, Catholic High won 50 of their next 59 games and averaged over 34 points per game.

In this DVD, the basic run plays of the Spin are included: The Spin Sweep, the Counter Sweep, and Quarterback Power. "What we've done is take a spread package and find a way to mesh it with the option and run plays. This DVD explains our basic Shotgun Double Slot Set and includes both the assignments and responsibilities for each player for our three base running plays." 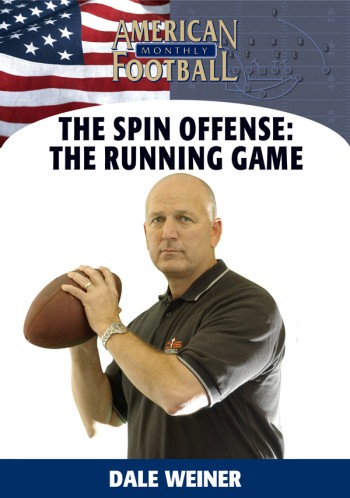