This video will look deeper into the Catholic High School Spin offense by specifically examining how to utilize the Spin offense to break defensive keys.

What are defensive keys? They are opportunities for the defense to get a pre-snap or post-snap read that will give them an advantage in stopping the play. When a defense looks at an offense, they generally look at one of three areas: 1. personnel - what offensive players key the play; 2. pre-snap alignment - what formations, alignments, stance, and depth of a back are keys for defenses; and 3. post-snap reads - once the ball has been snapped the defense tries to key the offense's initial movements.

This video examines how the Spin offense breaks defensive keys in the post-snap situations using deception, misdirection and play action. To learn how to break defensive keys of personnel and pre-snap alignments, check out Coach Weiner's video on using multiple formations (WN-07211). 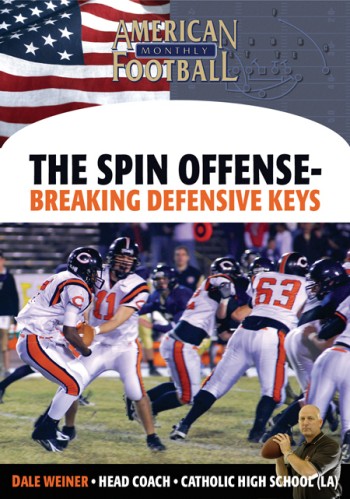