Six years ago while a high school head coach in Mississippi, Barry Gibson was at a point in his career that he had ran just about every type of offense in football. He was looking for something different, something that defenses would only see once a year. But most importantly, he was looking for something that would give an average team an advantage over stronger and more talented teams. That year, Coach Gibson created the Combo offense, which later became known as the Spin offense.

In this video, Coach Gibson will examine in great detail 5 weak side plays that are a great complement to your Spin offense. These are five plays where a different position is touching the ball on every play - quarterback, fullback, tight end, left split end and right slot back.
Those five plays are:

Spin Blast Weak - its gives you a play where the quarterback keeps the football and attacks the weak side.

Spin Trap - a play where your fullback gets the direct snap with a great trap blocking scheme away from the motion.

Spin Jump Pass - an excellent play that has stood the test of time which is a little spot pass to the tight end.

Spin Pass X Slant - a quick, short pass to the left split end in a void area of the field.

Spin Shovel Pass - a great misdirection, counter shovel pass going against the grain of the defense.

Coach Gibson will walk you through each of the above plays including blocking schemes, formations, position-by-position responsibilities and all the information needed to implement, set-up and successfully run these plays. 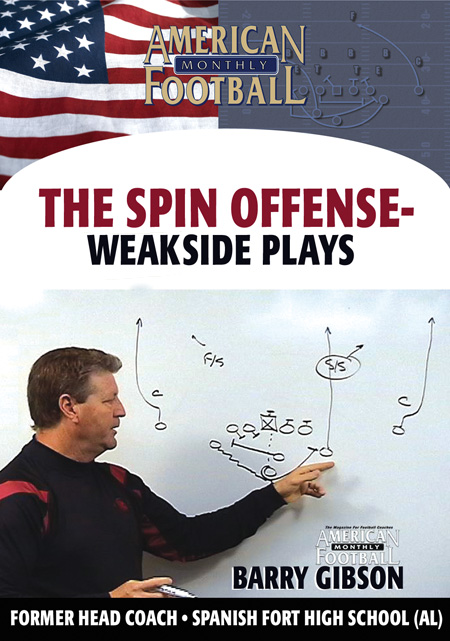