CLOSE - X
The Read Series Attack is the fourth DVD in a six-set series on the Spread Wing-T offense by Rich Hargitt, the Passing Game Coordinator and Quarterbacks Coach at Nation Ford High School in Ft. Mill, SC. In this series, the quarterback reads the backside defensive end and then makes his decision. A total of 11 different plays are included which can be run to either the tight end side or the split end side. Included are power plays, trap plays, and short yardage plays that can be implemented into any offensive scheme. This video shows coaches how to use a one back set in the spread wing-t with devastating effect.

In this DVD, you will learn from Coach Hargitt:
• The concept of the Read Series and why it works.
• How the QB reads the backside defensive end and makes a decision.
• Cross concept to get the QB involved
• Gut play
• Responsibilities for the Buck Sweep, Buck Read Cross, and Trap plays.
• Zone read variations including the G read and the Titan calls.
• A total of 11 different plays run to both the TE and SE sides.
• Base blocking and pull blocking for each play.
• Power short yardage plays run to both sides of the field. 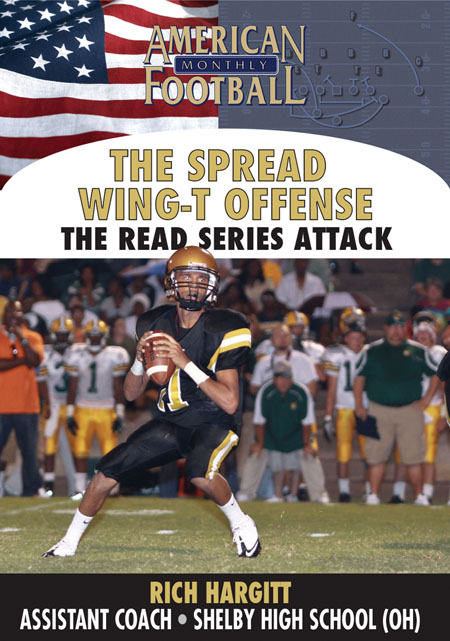