In this DVD, the second of a three part series, Langston University's Defensive Coordinator Jo Nixon discusses defending the 2-Back and Spread offense. Langston finished second among all NAIA school in defensive third down conversions and first in defensive fourth down conversions. Included are defensive adjustments to stopping the run as well as how to gain gap control. Coach Nixon also discusses the keys to D-Line penetration and linebacker scrape and pursuit.

In this DVD, you will learn from Coach Nixon:
* Principles of defending the 2-Back and Spread offense.
* How to gain defensive gap control.
* Keys to D-Line penetration, linebacker pursuit, and defensive secondary coverage.
* Stopping the run so you can drop 7 or 8 players into coverage.
* Personnel and alignment responsibilities against these offenses.

Coach Nixon:
"By using the attacking 3-4 defense effectively, you dictate to the offense and don't let the offense dictate the tempo of the game. All three levels of defensive responsibilities are discussed and the adjustments that are needed during the course of a game." 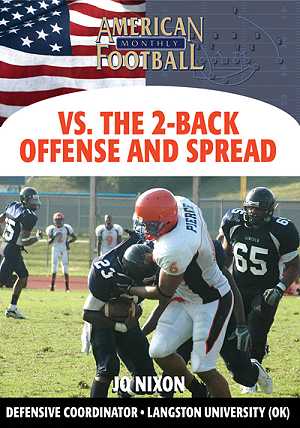