In the last nine seasons, Parkview High School (Baton Rouge, LA) has won 99 games, had nine straight playoff appearances and won two state championships. Under Offensive Coordinator Scott Dieterich, Parkland Baptist has run the combination Triple Option during that time and averaged 35 points per game. In this DVD, the first of a five-part series, Coach Dieterich discusses the strategy behind this offense and how you can combine the inside veer and outside veer.

In this DVD, you will learn from Coach Dieterich:

* The benefits of the combination triple option offense.
* Quarterback/fullback mesh techniques and quarterback pitch techniques.
* Combination triple option blocking rules.
* Adapting this offense to include the tight end with various formations.
* How to account for defenders when facing different defenses.
* What if? What adjustments should be made against 'problem' defensive looks.

"The combination Triple Option is both easy to install as well as teach to your athletes. It combines in one play the inside and outside veer and adjusts to all defenses. The quarterback and fullback mesh techniques are included as well as actual plays. 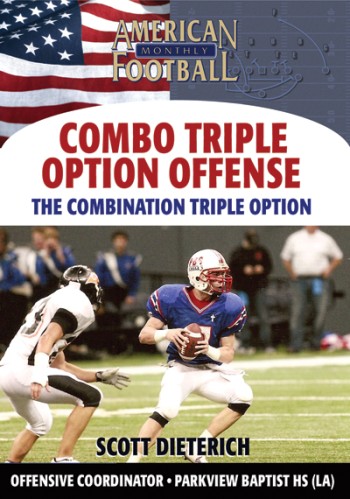