Conventional thinking when it comes to football strategy is not a part of Coach Kevin Kelley's philosophy. The head coach of Pulaski Academy, a three-time state champion under his tutelage, Kelley believes in not punting and using the on-side kick as an offensive play. In this DVD, Coach Kelley explains his strategy for using the two-point conversion effectively.

In this DVD, you will learn from Coach Kelley: 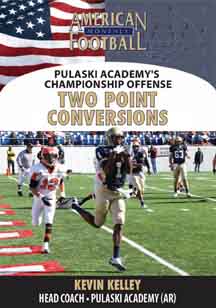