Kevin Kelley, the head coach at Pulaski Academy (AR), has won three state titles in his 7 years leading the program. Part of his philosophy includes an unconventional approach to the game with his belief in not punting the football. Coach Kelley’s strategy also includes onside kicking and going for two-point conversions. He recently completed a five-set series of DVDs on his offensive philosophy and strategy in specific situations and is now available at AFMvideos.com. In this first DVD, Coach Kelley details Pulaski Academy’s horizontal passing game.

In this DVD, you will learn from Coach Kelley:
• The overall philosophy and strategy of Pulaski’s horizontal passing game.
• The proper spacing of defenders (square yards concept).
• Pre-snap reads by both the quarterback and receivers.
• The vertical spacing of defenders (square yards concept).
• Man concepts vs. zone concepts.
• Crossing routes and reads.
• Isolating the short defender and using his momentum.
• Receivers taking care of one defender and the quarterback taking care of the other defender.
• Using defenders hips and shoulders instead of timing routes.
• Why an incompletion can be beneficial. 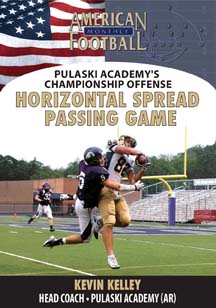