In this DVD, the first of a four-series set, Coach David Buchanan of Mason County High School (Maysville, KY) takes you through his Triple Screen play. While double screens are common, the triple screen is not. What Coach Buchanan wanted to do is to be able to attack the left, right, or middle of the defense. He also wanted to create a kickoff return play with a player carrying the ball with blockers in space. Nothing about this play indicates which way the ball will go.

In this DVD, you will learn from Coach Buchanan:

Coach Buchanan:
"The Triple Screen has become an effective part of our offense. You can turn a potential problem with your opponent's defense into an advantage by finding their weakness. The triple screen works best when you have an inside receiver on each side of the ball. On a fourth and 10 last year we called the triple screen and it went for a touchdown." 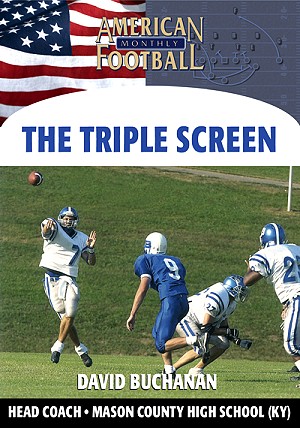