WN-07234 - Attacking The Split 4 Defense With the Veer Offense In this video you will learn from Coaches J.T. Curtis and Jeff Curtis:
* How to read the strong side defensive end and control play execution.
* How to attack the linebackers whether they are runners or fillers.
* What's needed to create a void in the defense.
* How to control the inside linebackers.
* Proper techniques and blocking assignments against the Split 4 defense for three plays: the Inside Veer, Outside Veer, and Cutback Play.
* Responses to the five most asked questions when playing against this defense.

Coach Jeff Curtis:
"This DVD gives coaches a concrete way to control the strong side defensive end in the Split 4 defense. He's the key to this defense. The proper reads are based on whether he plays inside or outside. Controlling this player lets us control the game." 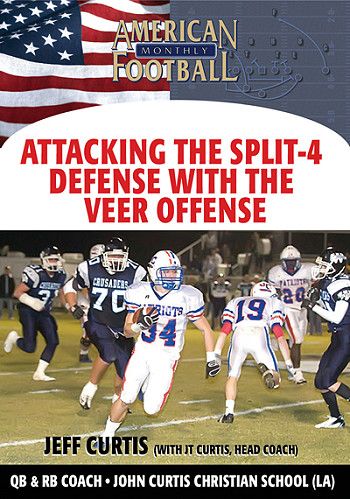