CLOSE - X
Coach Steve Belles of Hamilton High School in Chandler, AZ is a three-time state champion and architect of a 53-game winning streak that ended in last fall’s Arizona high school state playoffs. He recently completed a series of four DVDs now available at AFMVideos.com. In this DVD, Coach Belles details the finer points of his two-minute offense.

In this DVD, you will learn from Coach Belles:

• The Hamilton philosophy of moving the football.
• The concept of aggressively attacking the defense.
• The importance of controlling game tempo.
• Hamilton’s detailed receiver sets – either 3 x 2 or 2 x 2.
• The philosophy of signaling in play calls.
• Understanding a game plan for the two-minute offense.
• Importance of the quarterback picking up blitzes.
• What coverages to expect when game planning for the week.
• Stressing quarterback points – keys to keeping the offense moving.
• Importance of coaching young quarterbacks.
• Hamilton’s offensive line blocking schemes during their two-minute offense.
• How your quarterback selects who is the most dangerous weapon on each play.
• Hamilton’s play-action passing attack including the waggle pass.
• The philosophy and strategy of playing one play ahead. 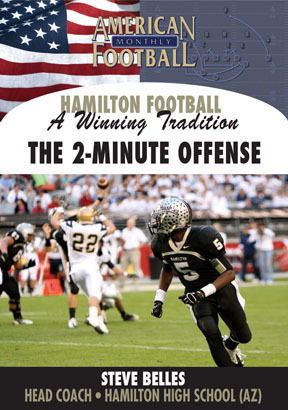